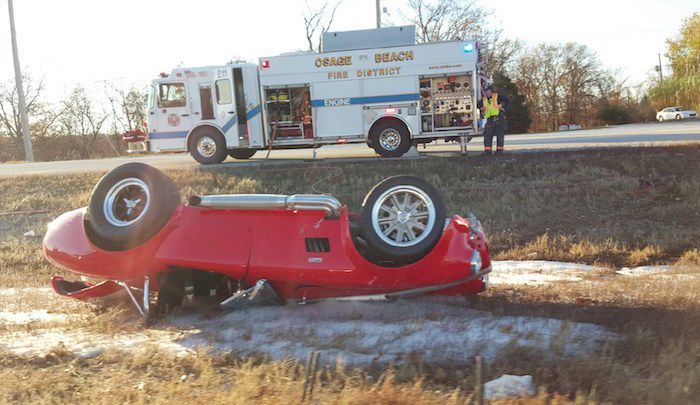 Two persons were injured after a rollover accident involving a convertible occurred near Osage Beach on the afternoon of Tuesday, November 10th. A 69-year-old man driving a 1993 Shelby Cobra was reportedly pulling out of Mexicali Blues onto Highway 54 just after 3:00 p.m. when he lost control of the vehicle and rolled it into the median. The driver and his one passenger, a 55-year-old man, both sustained moderate injuries and were transported from the scene to Lake Regional Hospital in Osage Beach for medical treatment. Both occupants of the vehicle were wearing seatbelts at the time of the accident.

When drivers and their passengers do not wear seat belt restraints, they are approximately forty-two times more likely to be killed if they are involved in accidents than those who buckle up. According to the Missouri State Highway Patrol, 63% of the persons killed in motor vehicle accidents in 2014 were not wearing seat belts.

Wearing seat belts is even more imperative when driving or riding in a convertible vehicle. According to the Insurance Institute for Highway Safety, convertibles most likely do not sustain impact as well as hardtop vehicles of the comparable model when involved in accidents. Although safety features have been implemented in newer convertible models to make them safer than their historical counterparts, there is no safety feature that can compare to wearing a safety belt restraint. When the ragtop is down, a seat belt is often the only thing that can prevent convertible occupants from being ejected during an accident.