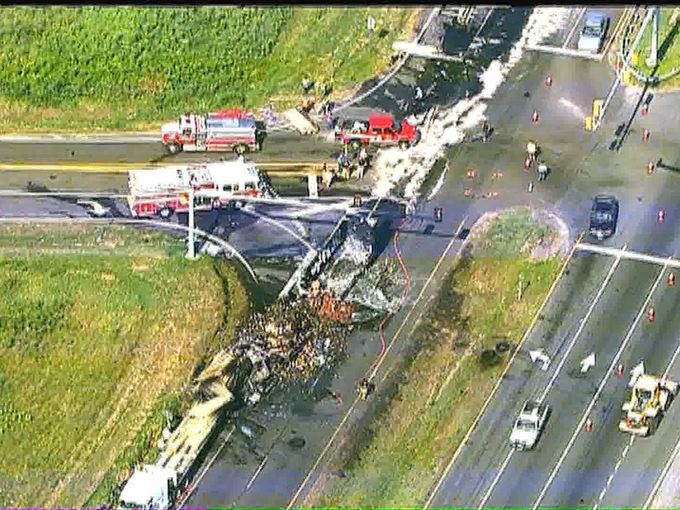 On Thursday, September 24th, Camdenton Police Department officers responded to the scene of an incident involving a tractor-trailer that was carrying flammable liquid. Just after 6:00 a.m., a semi-truck that was hauling motor oil caught on fire and spilled an estimated thirty gallons of the substance onto the roadway near the intersection of Highway 54 and Business Route 5 in Camdenton. One police officer sustained minor injuries while on site and was transported to Lake Regional Hospital. He has since been released.

To further complicate matters, the spill occurred near a storm drain, creating an even more pronounced sense of urgency for local and state law enforcement as they quickly squelched the flames and then worked to prevent the oil from contaminating Camdenton’s water supply. Fortunately, emergency crews were able to contain the spill before it seeped into the drain, but not before another tractor-trailer that was pulling a yacht became high-centered and got stuck in the oil at Business Route 5 and Illinois street. Bledsoe’s Towing Service workers quickly arrived and were able to free the halted truck. Traffic was diverted around the Camdenton town square area for approximately three hours Thursday throughout the course of this incident, with multiple law enforcement agencies and many officers responding until it was resolved.

Tractor-trailer accidents, especially when the trucks are transporting hazardous materials, can quickly spiral out of control and affect many different elements of normal life in a community. While collisions and other accidents involving tractor-trailers are less common than those involving other types of vehicles, injuries and other complications like we saw in Camdenton this week are much more likely to occur when these trucks are part of the equation.